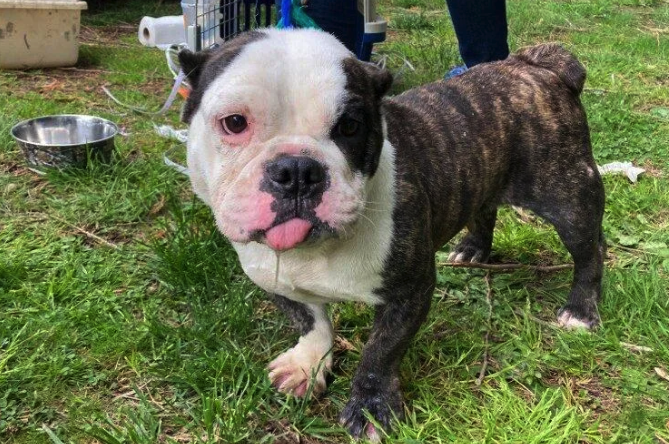 These Frenchies are ready for a fresh start!

According to Los Angeles dog rescue Wagmor Pets, 29 French bulldogs — including some French bulldog mixes — saved from meat markets in China are now in the United States looking for forever families.

Wagmor Pets first heard about the pooches in early March, when San Francisco-based Wonder Dog Rescue reached out asking for help transporting the needy Frenchies. Wonder Dog told Wagmor Pets that the French bulldogs belonged to dog breeders and then were sold to meat markets when their owners no longer deemed the canines valuable.

When Wagmor Pets entered the Frenchies’ story, the dogs had already been pulled from the meat markets and put into safe houses until they could fly to the United States, but several hurdles remained in the dog’s way before the trip.

First, the expenses for the lengthy international journey needed to be covered. Each dog’s trip cost over $1,000, making the total sum needed to save all the pets close to $30,000. Wagmor Pets banded with Wonder Dog Rescue, Pug Nation, Church of Pug, Tiny Paws Pug Rescue to fundraise for the dogs. The animal lover community responded, donating enough to cover the Frenchies’ flights.

The French Bulldogs made the long plane journey from China to the United States this month, landing in Washington. Animal rescuer Elaine Lam picked up the pups from the airport, and she and the Spokanimal Rescue are caring for the pets until they are ready for the last leg of their journey: flying to Los Angeles to find forever homes. While in Washington, the canines are getting vet checks, baths, and plenty of love.